The eagles’ demise was most likely the result of a risky “pair-bonding” ritual. During courtship displays, male and female eagles soar high into the sky, lock their talons together, and then spiral and cartwheel back down to Earth. Their intent is to test each other’s strength and fitness. Their intent is to release each other before reaching the ground.

This time of year, Wolf Hollow often receives calls about eagles. Their staff has responded to pairs that have become tangled in bushes, wrapped around tree branches, or found themselves plunged into a pond, with their talons still locked. Generally, the eagles are fine. After a bit of (skilled) encouragement, they let go of each other. This can be a difficult task. Eagles must change the position of their legs in order to release their grip. Sometimes their dramatic displays lead to an injury that requires treatment. But usually they are only exhausted and need a moment to rest. Both birds dying on impact is a first for our islands’ rehabilitation center.

Although accepting dead animals may seem unusual for a wildlife rehabilitation center to do, it’s not. In addition to caring for injured and orphaned wild creatures, Wolf Hollow carries out a range of other work. They are permitted to collect deceased Bald Eagles as it's illegal otherwise!

Wolf Hollow examined the two birds found on Mount Grant and determined their injuries to be consistent with hitting the ground. They both had internal hemorrhaging; one had a broken neck. Wolf Hollow didn’t determine the sexes of the two eagles. But their educated guess is that one was a male and the other was a female. Female birds of prey are larger, and one eagle had a noticeably larger head and beak.

Whether the pair were engaged in a courtship display or fighting over territory, we’ll never know. However, the birds will be sent to the U.S. Fish and Wildlife Service’s National Bald Eagle Repository and the feathers distributed to Native American Tribes and Alaska Natives for use in cultural and religious purposes. So, we can be assured, that their beauty and power will continue to be honored. 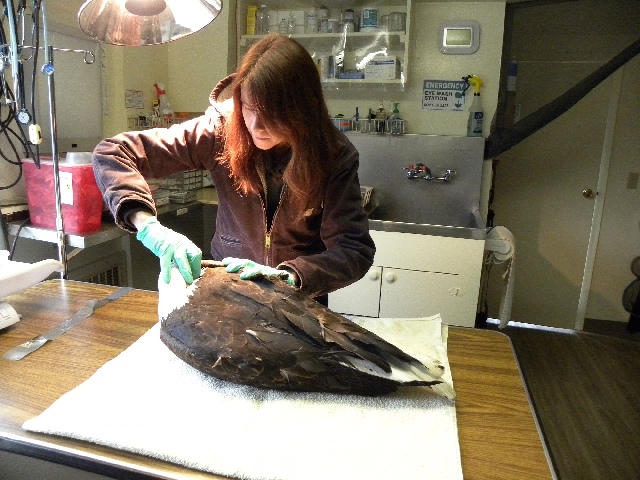