Kwiaht scientists also received ticks from Wolf Hollow Wildlife Rehabilitation Center and checked wildlife in San Juan Island National Park for ticks during routine ecosystem surveys that often encounter reptiles and small mammals. “One of our most exciting finds was a young female Alligator Lizard with four ticks,” says project coordinator Russel Barsh. “Based on the amount of blood the ticks had consumed, we learned that the host lizard had picked them up over a period of four days.” Alligator Lizards are reportedly a reservoir of ticks in the Gulf Islands, but their role in tick ecology in the San Juan Islands remains unclear.

Other ticks processed thus far were found on people, dogs, cats, deer, and a fox, and were collected on Cypress, Lopez, Orcas, San Juan, Waldron islands. Most were encountered in semi-rural residential areas, including backyards and parks, mainly shrubby rather than grassy.

Significantly, two of the three species of ticks recovered from people, pets, and wildlife
in the San Juan Islands are non-native, originating east of the Rocky Mountains. “We presume they were introduced to the islands by unwitting hikers and dog-owners,” Barsh says. “Once attached, a tick can feed for several days before dropping from its host, and can remain lively for a week or longer in clothing or sleeping bags.” A person with a pet can drive across the country in that time.

“There’s more to learn, and we should continue monitoring for the first signs of Lyme or other tick-borne diseases in the islands because we attract so many visitors from states where tick-borne diseases are well established,” Barsh says. Hikers, picnickers, pet-owners, hunters and farmers are urged to check for ticks, and submit any they find to Kwiaht for testing.

Ticks can be kept in a dry plastic sandwich bag or envelope, and mailed to
Kwiaht
PO Box 415
Lopez Island, WA 98261.
Include information on when and where the tick was found, and on what host, and a phone or email address where you can receive the results of testing.
Kwiaht 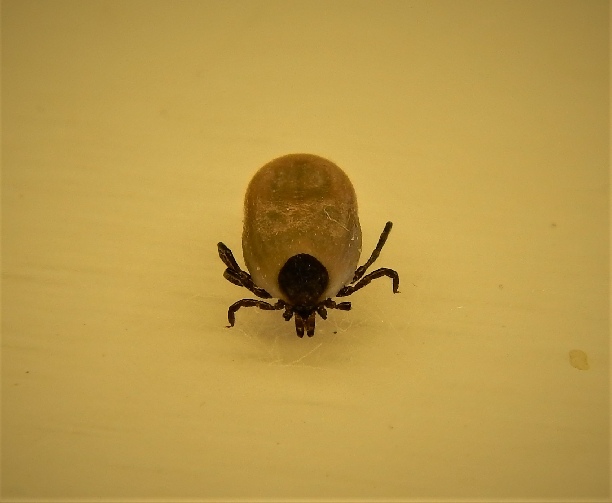 Tick from an Orcas Island pet